You can’t prove to me that marijuana is not addictive.  On the contrary I can prove that it is as addictive as alcohol, tobacco, or sex.  Just spend any time around prisoners and listen to their conversations and you will know the truth. Conversations in prison are practically fixated on alcohol, drugs, and sex.

Prisoners dwell in the past, sharing stories of their narcistic foibles and conquests. They relive, no doubt with embellishment, for themselves and others what they think of as the best times of their lives.  Some go to great lengths and at great expense to acquire these “necessities of life” while in prison.  They indulge in the illicit spud juice trade or pay outrageous prices to purchase tobacco, marijuana, or other drugs smuggled into prison. One of the really disturbing things is how men justify homosexual activity and claim that they are straight because the give rather than receive.  The first thing that many prisoners want to do when they get out is to stop at the party store and then get laid, even though it may have been 2, 5, 10, or 20 years since they had their favorite drink or smoke. 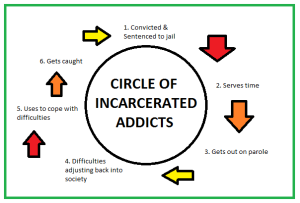 Addictions may be chemical like heroin, but most are psychological. Any activity that stimulates the pleasure centers of the brain to the point that it upsets the brains natural equilibrium will foster a desire to recapture the feelings of euphoria.  The person seeks anything that will help regain that feeling.  The mind plays tricks by minimizing the negative side-effects.  Alcoholics keep getting drunk regardless of the hangovers or getting sick.  Drug users crash after their bodies can no longer stay awake after days of sleeplessness.  Marijuana smokers get the munchies and fall asleep.  They don’t suffer the negative side effects that slowly kill the body, instead it’s about killing motivation. Brain cells in key sections of the brain are damaged placing the user into a sort of suspended animation. Instead of continuing to develop their lives these heavy marijuana smokers stop growing mentally and emotionally.  They enjoy their party life, not realizing how lame they have become.  They don’t see anything wrong therefore there is no reason to change. They like themselves and those they hang out with.  To quote Forest Gump, “Stupid is as stupid does.”  They reinforce each other’s bad behavior and it only gets worse in prison.

Bad behavior in prison by and large goes unchallenged by any meaningful education, discipline, or constructive alternative.  That’s why programming fails, punishment is ineffective, and the alternatives are unappealing.  Addicts have the highest recidivism rate because prison is not a deterrent.  An addict’s only desire is to recapture the “high” at any cost.

Addicts often have no family support because they have stolen from those they claim to love, betraying trust and have been rejected and cast out.  This only serves to drive the addict deeper into their circle of addicted acquaintances.  They really can’t call them friends because they steal from them too, but they have one thing in common and nowhere else to go or do.

What is called for is an interdiction.  The only way to save an addict from themselves is for someone to break through the barrier of lies that they have surrounded themselves with. You’d think prison would be a place where this happens but unfortunately no.  You have addicts locked up and are failing to provide the type of help that is badly needed. Prisons need more trained therapists to address this issue rather than turnkeys who are apathetic at best and generally hostile towards anything that could result in real change.

Prison should be a place where people who failed to participate as a successful member of a civil society receive the re-education that clearly states what is expected of them without distractions.  The messages need to be compelling and undistracted by competing messages that glorify the lifestyle choices that brought them to prison in the first place.

This site uses Akismet to reduce spam. Learn how your comment data is processed.

Links to Websites I Recommend

Citizens United for Rehabilitation of Errants (CURE) a  grass roots organization that believes that prison should only be used for those who absolutely must be incarcerated.  That those incarcerated should have all the resources they need to turn their lives around.

KERYX  is a lay-led, non-profit, interdenominational, Christian ministry that is active in prisons around the world and right here in Michigan.  They provide a highly structured program that promotes solid Christian life-skills.  I am a proud graduate of their program.

HonerRestored is an organization founded by a guy I knew in prison dedicated to abolishing the Sex Offender Registration Act in Michigan which the US Supreme Court has said violates the constitutional rights of those forced to register.

Reform Alliance The mission of the REFORM Alliance is to dramatically reduce the number of people who are unjustly under the control of the criminal justice system – starting with probation and parole.  I wholeheartedly agree with goal.

The Marshall Project is a nonpartisan, nonprofit news organization that seeks to create and sustain a sense of national urgency about the U.S. criminal justice system. They achieve this through award-winning journalism, partnerships with other news outlets and public forums. In all of their work they strive to educate and enlarge the audience of people who care about the state of criminal justice.

Prison Fellowship was founded in 1976 and exists to serve all those affected by crime and incarceration, and to see lives and communities restored in and out of prison—one transformed life at a time.  While I never had direct contact with any Prison Fellowship staff or programs at any of the prisons I was housed at, I know it is the gold standard for prison ministries and I have great respect for what they are doing both in America and around the world.

Rock of Ages Ministries is dedicated to fulfilling the Great Commission in taking the Gospel to prisons, educational institutions, military prisons, and through their church planting assistance program.  Established on 5 continents preaching the Gospel and conducting discipleship classes on a daily basis.  Their goal is to glorify God by taking the Gospel to the entire world.  ROA is active in Michigan prisons and their preachers were faithful men of God who preached the word of God and I highly respect them.